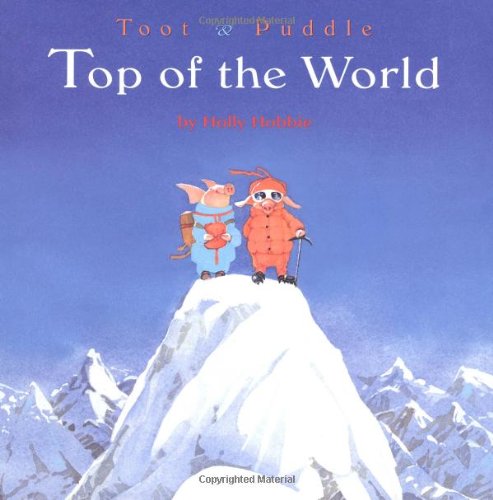 TOOT AND PUDDLE: Top of the World

Hobbie's winsome pigs are traveling again, up Orchard Hill and through the woods to the top of the world, but this time the various themes of the book are less integrated. What begins as a tender story about the fear of loss and friendship quickly becomes a less substantial picaresque adventure that relies heavily on readers' knowledge of previous Toot and Puddle books. Toot leaves a note for Puddle, "Gone for a walk. Be back soon." But when he doesn't return by nighttime, Puddle envisions him "[tumbling] into a hole... or ." The sweetly touching illustrations of timid Puddle imagining wolves and confronting the dark woods are so successful that the lighthearted action in the last half seems almost like a different book. Fortunately for the implausible plot, Puddle's own whimsical choices lead him directly to the same place as his missing friend ("Which way would I go... if I was Toot," he asks himself). One of the strengths of this series is its appeal to both young and old alike, but here young readers who worry about parents and friends leaving and not coming back may find it hard to excuse Toot's egocentric search for adventure and his lack of consideration for Puddle. Nonetheless, Hobbie's expert and endearing paintings, some of which are standouts in the series, will appeal to her many fans. Ages 4-8.