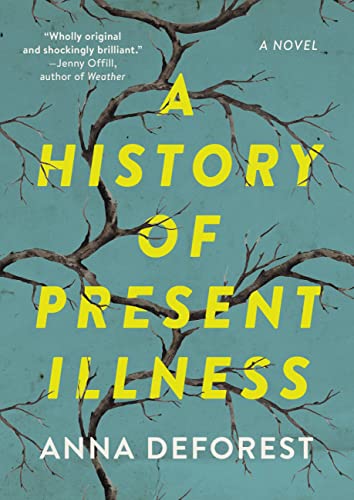 A History of Present Illness

Palliative care physician DeForest delivers a reflective debut about cadavers, family trauma, and perplexing ailments. During the unnamed narrator’s term as a medical student, she tries to process her experiences as well as her history of abuse and neglect. She spends a lot of time by the bed of Ada, a younger woman with a slow encephalitis. Throughout, the narrator offers arresting reflections on the godlike powers doctors hold over their patients (“No one even dies until we let them”), on the desensitization that comes with seeing so much pain and death, and the pressure and competitiveness that often pushes residents to self-harming behaviors. Fascinating medical facts abound (for example: during an autopsy, fixative is used on the brain to preserve it), along with disturbing passages about the narrator’s stepfather, who would lock her and her siblings in the basement. The tone remains detached, creating an atmosphere that echoes the narrator’s “mechanical existence.” There’s not much of a story, but DeForest does a great job conveying the impact of the surroundings on her narrator, as well as how she learns the value of honesty with patients’ families, after giving Ada’s husband the unvarnished truth about her fate. This slim volume gives readers much to contemplate. Agent: Sarah Burnes, Gernert Company. (Aug.)

Correction: An earlier version of this review mistakenly referred to the book's narrator as a medical resident.