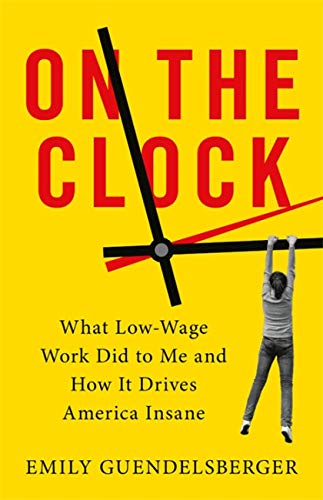 On the Clock: What Low-Wage Work Did to Me and How It Drives America Insane

In this spiritual sequel to Barbara Ehrenreich’s 2001 Nickel and Dimed, journalist Guendelsberger takes jobs at an Amazon fulfillment warehouse, an AT&T call center, and a McDonald’s franchise to investigate the sheer implausibility of living on minimum wage and the Kafkaesque features of service industry work. These include the Tylenol- and Advil-dispensing vending machines at the Amazon warehouse, a symbol of the excruciating pain that is an expected part of the job; bosses changing time sheets to deduct minutes employees spent in the bathroom; and screaming customers flinging condiment packets. Guendelsberger’s coworkers are charismatic and charming, and completely unaware that they deserve a lot better from their employers: one of her fellow employees suffers a panic attack that requires emergency services and another attempts dental surgery on herself. Interspersed throughout are references to early 20th-century moguls like Frederick Winslow Taylor and Henry Ford (who pioneered the use of assembly lines to control workers’ pace, a predecessor to Amazon’s pace-tracking practices), giving historical background on how the plight of today’s overburdened working class came to be. Guendelsberger’s narration is vivid, humorous, and honest; she admits to the feelings of despair, panic, and shame that these jobs frequently inspire, allowing for a more complex and complete picture of the experience. This is a riveting window into minimum-wage work and the subsistence living it engenders. [em]Agent: Lydia Wills, Lydia Wills LLC. (July) [/em]

Correction: An earlier version of this review misstated the year Nickel and Dimed was published.