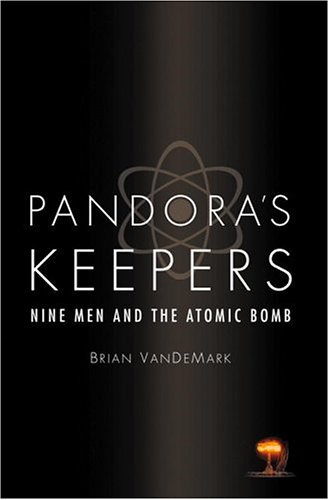 As the subtitle suggests, this is a biography of a scientific generation, treating the nine men who built the atom bomb and how each of them grappled with the implications of their awesome creation. The story of the Manhattan Project is famous, and so are the complicated, remarkable men behind it, whom VanDeMark, a professor at the U.S. Naval Academy and coauthor of Robert S. McNamara's bestseller, , brings engrossingly to life: men like Oppenheimer, Bethe, Bohr, Teller, Fermi and Szilard. But VanDeMark says he is interested in the human rather than the scientific story: a tale of moral ambiguity in "an imperfect world that sometimes forges good from evil and evil from good." The author tackles his subject in two parts. The first treats the "frenzy of creation" that took on a life of its own, and how, when their work was done, the scientists involved "came to fear the very thing they had built to end fear." The book's second part addresses the rude awakening of the atomic scientists, who had previously lived in the detached, rarefied world of academia, to the moral implications of their contribution for world politics. VanDeMark does not overlook its implications in today's world, questioning the viability of deterrence when "fanatics, driven by zealotry that knows no ethical constraints" may gain access to nuclear weapons. He concludes that "there is hope," but not all readers will find hope in his statement that we must rely on good sense to avoid disaster. 16 pages of b&w photos not seen by .