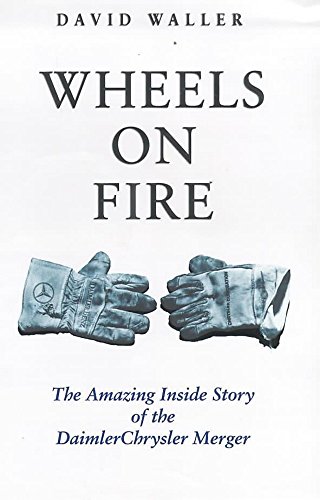 WHEELS ON FIRE: The Amazing Inside Story of the Daimler-Chrysler Merger

In 1998, when news of the Daimler-Benz/Chrysler merger was announced, it shocked most of the industrialized world, but you'd hardly know that from this dull account. While gigantic mergers are mundane in the global marketplace, this merger, between a German company and a U.S. company, involved touchy issues of national identity, evident when a CNBC reporter pointed out, "Chrysler produced tanks for General Patton and Mercedes was producing war armaments for Adolf Hitler." Even though the deal was touted as a joining of equals, the reality was that it was a friendly takeover of Chrysler by Daimler-Benz. Waller aims at an overview, giving brief portraits of both companies' histories and corporate personalities, as well as details of the secretive deal making and legal wrangling that culminated in the final merger. While the book competently fulfills these aims, Waller fails to shape it into a dynamic narrative. Many of the primary players—such as Chrysler CEO and chairman Bob Eaton—receive cursory treatment. The striking exception is Eaton's counterpart, Jürgen Schrempp, the chairman of Daimler-Benz's board of management and the architect of the deal, whose life and character Waller copiously details. While this imbalance probably derives from the author's years of covering German business for the more time researching the American end of the deal would have made this account more appealing to readers in the U.S. B&w photos.