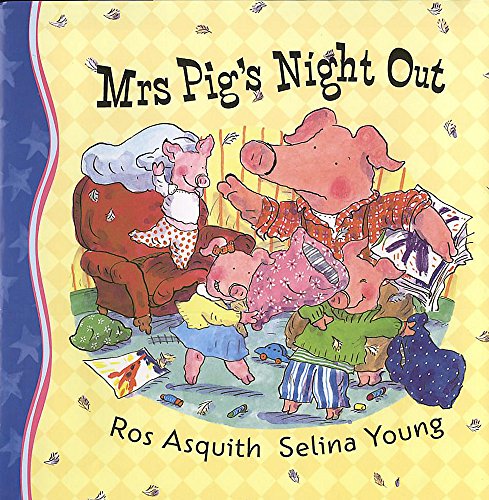 "Dear, oh dear," thinks Mrs. Pig as she leaves her three tearful, bereft piglets in Daddy's charge and embarks on a clearly well-deserved night out. But the seemingly despondent offspring recover quickly—after all, when Mum's away, Daddy is easy prey. In short order, they gain his permission to have numerous pillow fights, watch far too much on the Piglet channel (while their father catnaps), and in general, wreak havoc on the house, until Mr. Pig hustles them off to bed just as they hear Mrs. Pig's shoes "crunching up the gravel path." A series of spot illustrations captures the modest mayhem as the trio flails pillows and feathers scatter everywhere; successive spreads document the growing clutter in the living room. This paper-over-board book depicts a familiar slice of domestic life—right down to Mom letting Dad off the hook at the end (she declines to point out to her spouse that her now-sleeping children are still dressed in their day clothes). But Asquith's () deadpan humor and crisp British prose rhythms inject a freshness and spriteliness to the proceedings: "Mrs. Pig looked around. She saw lots of feathers. She saw a large pile of drawings, including some interesting ones of Mr. Pig, apparently asleep." Young's () sprightly watercolor-and-ink pictures bubble with the piglets' unfettered freedom and mischievousness. The premise may be an oldie, but this team turns it into a goodie. Ages 4-7.