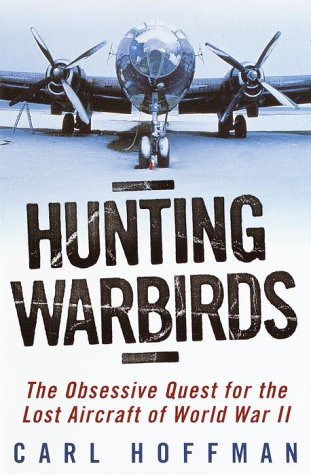 HUNTING WARBIRDS: The Obsessive Quest for the Lost Aircraft of World War II

Sent to Greenland by magazine to write a piece about Navy P-3 Orion aircraft and their search for submarines, freelance journalist Hoffman was taken up by the crew he was interviewing, with a detour past the ruins of a WWII-era B-29 "Flying Fortress," the . Hoffman became hooked, and he found he was not alone in his obsession about the downed plane, which had crashed at the edge of a lake 40 years earlier, and was nearly perfectly preserved. In a painstaking blow-by-blow reconstruction, Hoffman charts three separate expeditions that were made by an assortment of amateur obsessives to salvage—read: restore and fly—the Kee Bird, writing in the first person when he went along on a trip, and in the third when recounting the adventures of the diverse subculture of plane salvagers when he couldn't. Their efforts go for naught, and anyone who doesn't already have the flier bug will have shut the book before the marooned bird's engines catch—and then catch fire. Written with assurance, Hoffman's debut will certainly hold the buff market rapt, and will also find some readers of extreme sports and travel narratives, but it doesn't have the breadth to break out, though a 5-city author tour could help draw in readers.