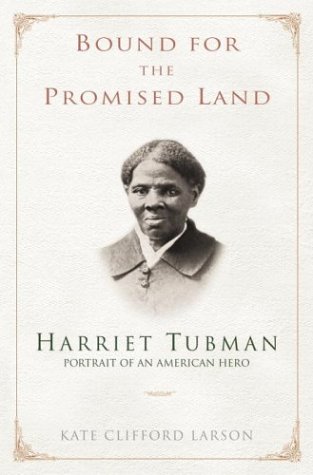 BOUND FOR THE PROMISED LAND: Harriet Tubman, Portrait of an American Hero

Few American historical figures are as familiar in legend as Tubman (1822?–1913), and as little known in fact. Although at least 30 juvenile biographies have treated her, Larson's is the first adult biography to appear since Earl Conrad's (1943). This pedestrian (in the neutral sense) account presents new investigative sources, utilizing court records and contemporary local newspapers, wills and letters, along with legal and illegal transactions. Larson directs tangled traffic as Tubman and her relatives are "passed down through several generations"; she traces the lives of the white owners as well the black "blended community of free and enslaved people" on Maryland's Eastern Shore, where Tubman grew up in slavery—and where she returned time and again to spirit slaves to freedom. In recounting Tubman's routes and ruses, as the figure known as "Moses," Larson freshly identifies many of the escapees as she delineates the solid role of free and enslaved blacks in the Underground Railroad. She identifies Tubman's "sleeping spells, periods of semi-consciousness," as temporal lobe epilepsy. With Tubman's support of John Brown and her activities during the Civil War, Larson arrives where the Tubman legend usually ends—with Tubman immortalized "forever as an Underground Railroad Agent and Civil War spy." As in the only other adult biography, Sarah Bradford's (1869), Larson follows her subject into her post–Civil War life supporting freedmen in the South and tending to a large household, including a young woman Larson speculates may have been Tubman's daughter. While this history is well done, competition will arrive in February, when Little, Brown publishes Catherine Clinton's .