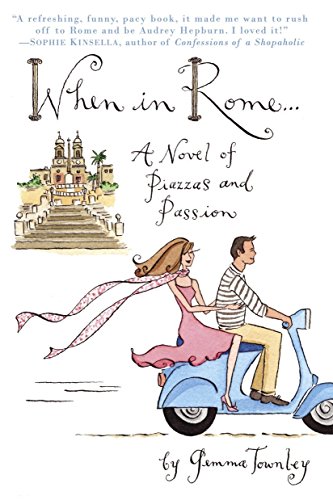 Scattered with references to , this would-be madcap romantic comedy by the sister of bestselling chick-lit writer Sophie Kinsella strives for love, laughs and intrigue but lacks the necessary charm and flair. Blithely irresponsible Georgie Beauchamps, a researcher at a legal publishing company in London, dates serious, dependable David Bradley, an accountant who investigates crooked financial dealings. But Georgie still holds a torch for her ex, the devilishly handsome Mike Marshall, and when Mike asks her to accompany him on a trip to Rome, Georgie jumps at the opportunity, thinking he has realized the error of his ways and is trying to win her back. But the suddenly wealthy Mike seems to be up to no good, and when David shows up in Rome on business, Georgie slowly starts delving into the puzzle. But Georgie unveils more than just a mystery—she discovers a source of strength in herself, uncovering a scandal at her own company and accusing long-suffering David of treating her like a child when he miraculously forgives her for her dalliances and betrayals. David may play along, but some readers will be rubbed the wrong way by Georgie. Though the plot zooms as fast (if sometimes as erratically) as a Vespa on the streets of Rome, the novel's selfish protagonist drains the fun from this jangly caper.