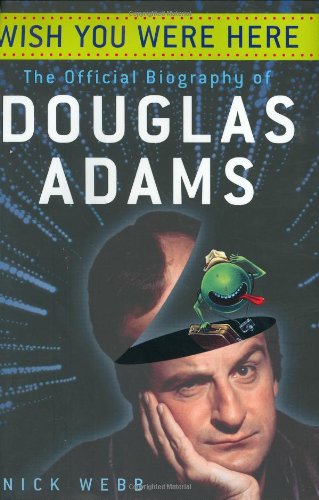 WISH YOU WERE HERE: The Official Biography of Douglas Adams

Webb was the editor at Britain's Pan Books who bought the book rights to Adams's in 1978, back when it was a hit radio show on the BBC. While Webb didn't have much to do with Adams professionally after that, the two remained friendly until Adams's death, at age 49, in 2001, and that closeness pervades this authorized biography and its conversational tone. That doesn't mean the story is sugarcoated; Adams is occasionally chided for his emotional thickness, and Webb deals frankly with the consequences of his chronic slowness as a writer (one novel was produced only when his editor, Sonny Mehta, booked a hotel room and sat with him as he turned out the pages). Another section addresses the thorny issue of who contributed what to the zany plot line of the radio series and how Adams's collaborator, John Lloyd, was nudged out of the book deal. For the most part, however, Webb genially celebrates Adams's comic talent and zest for life, aiming his account squarely at the large fan base with occasional overtures to readers who don't necessarily know every nuance of the trilogy. It might be overstating matters to suggest that "before Douglas nobody had been funny," but Webb's tribute makes it easy to see why those who knew Adams admired him so greatly.