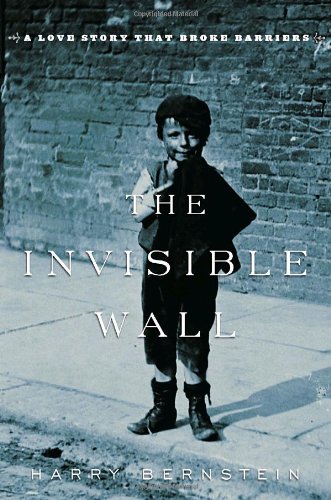 The Invisible Wall: A Love Story that Broke \t\t Barriers

Bernstein writes, "There are few rules or unwritten laws that are not \t\t broken when circumstances demand, and few distances that are too great to be \t\t traveled," about the figurative divide ("geographically... only a few yards, \t\t socially... miles and miles") keeping Jews and Christians apart in the poor \t\t Lancashire mill town in England where he was raised. In his affecting debut \t\t memoir, the nonagenarian gives voice to a childhood version of himself who \t\t witnesses his older sister's love for a Christian boy break down the invisible \t\t wall that kept Jewish families from Christians across the street. With little \t\t self-conscious authorial intervention, young Harry serves as a wide-eyed guide \t\t to a world since dismantledâ€”where "snot rags" are handkerchiefs, children \t\t enter the workforce at 12 and religion bifurcates everything, including \t\t industry. True to a child's experience, it is the details of domestic life that \t\t illuminate the taleâ€”the tenderness of a mother's sacrifice, the nearly \t\t Dickensian angst of a drunken father, the violence of schoolyard anti-Semitism, \t\t the "strange odors" of "forbidden foods" in neighbor's homes. Yet when major \t\t world events touch the poverty-stricken block (the Russian revolution claims \t\t the rabbi's son, neighbors leave for WWI), the individual coming-of-age is \t\t intensified without being trivialized, and the conversational account takes on \t\t the heft of a historical novel with stirring success.