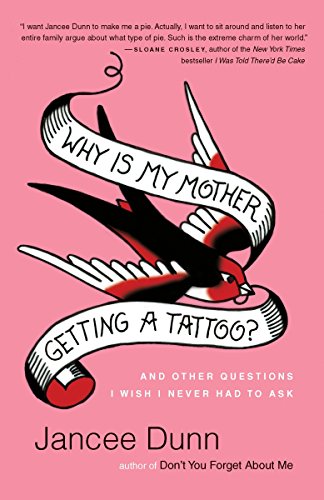 Why Is My Mother Getting a Tattoo?: And Other Questions I Wish I Never Had to Ask

Dunn's travails will be instantly recognizable to readers in their late 30s and 40s—a generation that's shifted the family bickering about what to serve at holiday dinners to conference calls and e-mails. Her parents are a bottomless well of comedy, sending her wacky newspaper clippings and grilling her loudly about her inability to go to the bathroom during their vacation. Her circle of friends is equally familiar, like the gay buddy who invites her over for TV-movie parties and can always be counted on to make catty remarks about strangers. Several chapters are filled with transcripts of phone conversations with her best friend, Julie, flitting from topic to topic, comparing the embarrassing songs saved on their iPods and wondering why their parents haven't figured out voice mail isn't like an answering machine (“Hello? Anybody there? Hello, it's Dad”). Dunn's tone is genial, only turning serious briefly near the end when she discusses not having kids—and then inadvertently discovers she's finally pregnant. The seriousness doesn't last long, though, and soon it's back to affectionately mocking her mom's decision to get tattooed—although, as her sisters point out, she's secretly pleased to have something new to write about.