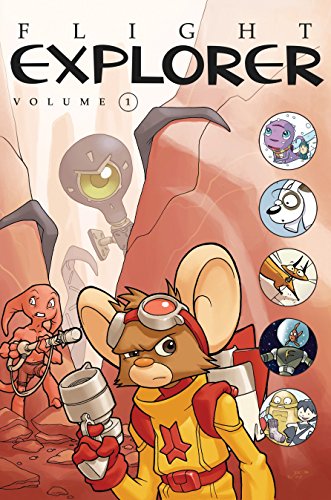 The multi-volume Flight anthology series has introduced a group of young cartoonists influenced more by animation than by American comics; this work is its new sibling, featuring 10 Flight artists writing and drawing short, whimsical stories aimed at middle-graders. Kibuishi leads it off with the two strongest stories: a cheerfully surreal episode of his own boy-and-his-dog series, Copper, in which the heroes traverse a chasm by jumping on giant mushrooms that turn out to be the heads of threatening creatures, and Johane Matte’s “Perfect Cat,” a little fable written and drawn in the style of mod ’60s animation, about a grouchy alley cat in ancient Egypt who learns that feline perfection has its downside. The rest are more hit-and-miss: Kean Soo’s “First Snow,” an episode of his girl-and-her-monster series, Jellaby, is nearly plotless, and Jake Parker’s “Missile Mouse: The Guardian Prophecy” is pro forma sci-fi. Some pieces start with a funny premise (Ben Hatke’s “If Wishes Were Socks” concerns a girl, her robot and a magical wishing sock), but then spin their wheels. The book’s full-color art is consistently stylish—Matthew Armstrong’s “Snow Cap” stands out visually—but readers may find themselves wishing for better developed tales. Ages 8-up.