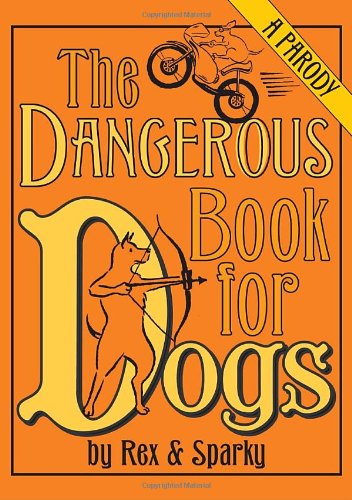 The Dangerous Book for Dogs: A Parody by Rex and Sparky

This gentle parody of the bestselling â€”identical in look and tone to its source materialâ€”offers an often funny, surprisingly insightful take on dog behavior that's sure to resonate with the Spot set. With the â€œassistanceâ€ of their human companions, canine authors Rex and Sparky relate practical and authoritative information on topics simple (baths, fleas, bones, poop, â€œthings you can chaseâ€) and complex (the rules of fetch: it's not officially over until a player earns 17,572 points), tips on crotch sniffing (under the heading â€œHow to Make Your Owner Look Like an Idiotâ€), and a critical guide to frequently ingested items (vomit and poop receive top marks; rocks and keys rank considerably lower). Among more than 50 short entries, the authors seem to have thought of everything, including escape tips for humiliating costumes, stirring true stories (â€œGreat Dog Battlesâ€”Part Two: Pepper vs. A Patch of Lightâ€) and even a report on Pavlov (written by his two dogs). Though it occasionally pushes the envelope of good taste (â€œmounting a bitch is never as simple as it seemsâ€), this goofy, gleeful guide to the dog life will tickle anyone with a soft spot for canines.