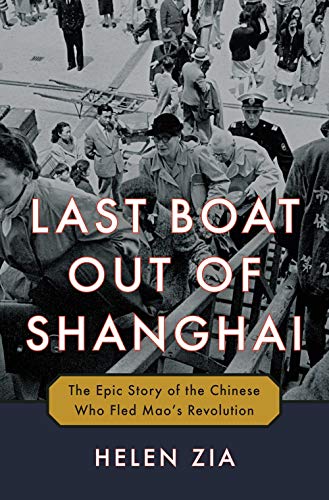 Last Boat Out of Shanghai: The Epic Story of the Chinese Who Fled Mao’s Revolution

In this enthralling, heartfelt narrative, journalist Zia (Asian American Dreams) tells the stories of four people during the 1949 mass exodus from Shanghai following China’s Communist takeover. Benny Pan was raised in affluence as the son of the Shanghai Municipal Police inspector; after his father was jailed for collaborating with the Japanese, Benny protected his younger siblings, helping one escape to Hong Kong, and struggled to survive while remaining in Communist China. Academically gifted Ho Chow, a member of China’s land-owning gentry, moved to Shanghai in 1937 to escape the imminent war with Japan, then continued his studies in the U.S. while his family contended with postwar hyperinflation at home. Bing Woo, the author’s mother, came from an impoverished family who gave her up for adoption; she fled to San Francisco at age 20 with her second adoptive family. Annuo Liu, the daughter of a high-ranking Nationalist official, escaped with her family to Taiwan, joining thousands of other unwelcome exiles. At the heart of the story is Shanghai, China’s “most modern, cosmopolitan and populous city” with its enclaves of foreigners, bustling markets, thriving port, and opium dens, coexisting during the war with aerial bombings, martial law, and panicked upper- and middle-class residents seeking refuge wherever they could. Vivid and well-researched, Zia’s engrossing work brings this tumultuous period to life. Agent: Sydelle Kramer, Susan Rabiner Literary. (Jan.)
close
Details