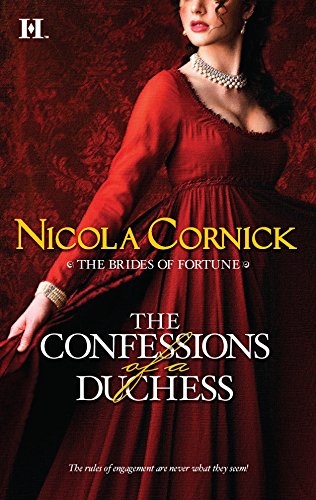 The Confessions of a Duchess

Cornick ( ) introduces the small village of Fortune’s Folly in the nondescript launch of her Brides of Fortune Regency romance series. When unscrupulous Sir Montague Fortune, jilted by a rich woman, reinstates the medieval Dames’ Tax, the population soars with impoverished men seeking wealthy spinsters and widows who would rather marry than pay half their money to the odious squire. Sent to the village by the Home Secretary to investigate a murder and determined to find a well-dowered wife, Dexter Anstruther encounters his feisty ex-lover Laura, the dowager duchess of Cole. While Dexter follows clues to the murder mystery and Laura unites the single women in a humorous war against Sir Montague, the two are distracted by lust and endless opportunities for verbal sparring. Witty but lacking historical depth, this romance is neither disappointing nor outstanding.