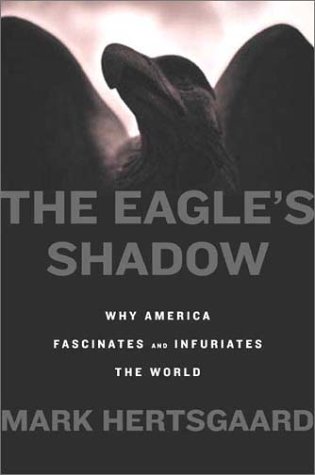 THE EAGLE'S SHADOW: Why America Fascinates and Infuriates the World

In May 2001, Hertsgaard () began a six-month journey through 15 countries to interview people of all sorts, from bus drivers to former parliamentarians, about one thing: the United States. Each chapter of his book opens with an anecdote illustrating a perception he found to be widespread: the United States is a land of vast wealth but also gross self-indulgence; American leaders are influential but arrogant and naïve; and American citizens have immense freedom but are nonetheless insulated and ignorant. The impressions Hertsgaard gathers, however, serve primarily as springboards from which he plunges into his own blunt, sometimes dour analysis of American attitudes, practices and institutions. Hertsgaard at one point tells of a Cuban boy he met after America's presidential elections. "It sounds like you are having trouble with your democracy in the United States," the boy teases. "Perhaps Cuba should send you election observers next time." The wisecrack is an apt introduction to Hertsgaard's interpretation of the Florida ballot impasse, which he thinks exemplifies the faults of America's democratic process. If Hertsgaard's strength lies in elaborating upon foreigners' perceptions, however, his weakness lies in the way he addresses his readers. "I know that parts of this book will be difficult for some Americans to hear," he writes, in a tone a bit too superior.