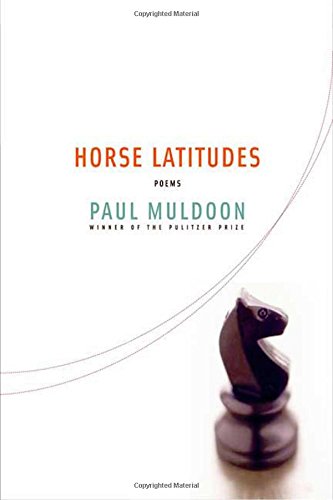 Muldoon is undisputedly a master poet. Many of his poems distinctly take up the poetic tradition yet skew it with half-rhymes and unlikely subjects for classical forms, and also engage deeply with the troubled politics of his native Northern Ireland yet intertwine them with Muldoon's own personal history, mythology and esoteric symbolism. If these poems are reluctant to offer themselves to easy interpretation, they nonetheless seduce the reader into repeated readings in which they only grow more interesting, a sure sign of their capacity to last. In his 11th collection, the Pulitzer Prize–winner and former professor of poetry at Oxford (his Oxford lectures are being released concurrently) is as good as ever. Amid the usual parade of poetic forms (a riddle, haiku and pantoum, among others), he treats post-9/11 America ("those were Twin Towers, right?"); aging, fatherhood and mortality ("a country toward which I've been rowing/ for fifty years"); the notion of "the old country" in a tour-de-force crown of sonnets ("Every escape was a narrow escape/ where every stroke was a broad stroke/ of an ax on a pig nape./ Every pig was a pig in a poke"); and the deaths of his sister and rocker Warren Zevon. With signature wit, Muldoon is preoccupied with the passage of time, the ways things change and stay the same, the distance between one culture and another, as well as the narrowing gap between high and popular culture.