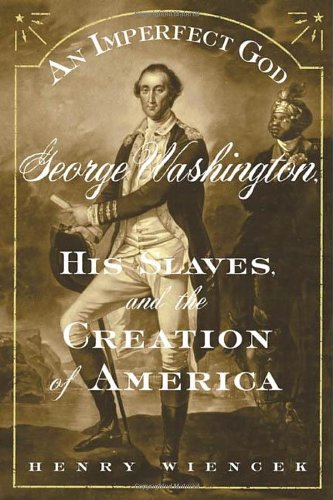 AN IMPERFECT GOD: George Washington, His Slaves, and the Creation of America

This important work, sure to be of compelling interest to anyone concerned with the nation's origins, its founders and its history of race slavery, is the first extended history of its subject. Wiencek (who won a National Book Critics Circle award for ) relates not only the embrangled "blood" history of Washington's family and that of the Custis clan into which he married, but also the first-person tale, often belabored, of his own search for facts and truth. What will surely gain the book widest notice is Wiencek's careful evaluation of the evidence that Washington himself may have fathered the child of a slave. His verdict? Possible, but highly improbable. Yet his detective work places the search on a higher plane than ever before. Also, while being a social history (unnecessarily padded in some places) of 18th-century Virginia and filled with affecting stories of individual slaves, the book stands out for depicting Washington's deep moral struggle with slavery and his gradual "moral transfiguration" after watching some young slaves raffled off. While by no means above dissimulation, even lying, about his and Martha's bond servants, by the time of his death in 1799 Washington had become a firm, if quiet, opponent of the slave system. By freeing his slaves upon Martha's death, he stood head and shoulders above almost all his American contemporaries. This work of stylish scholarship and genealogical investigation makes Washington an even greater and more human figure than he has seemed before.