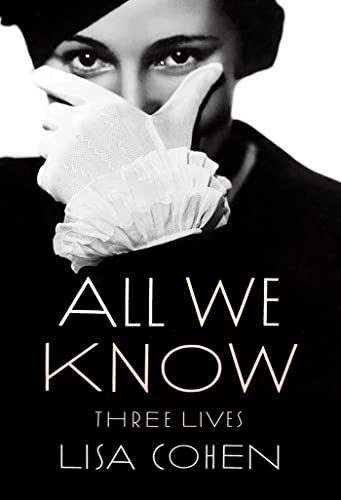 All We Know: Three Lives

Esther Murphy (1897–1962) was a talker, but a brilliant one; Mercedes de Acosta (1893–1968), was a “seductress” who saved every scrap of memorabilia; witty aesthete, style icon, and feminist Madge Garland (1898–1990) was an editor at British Vogue. They knew each other well from social circles, and none of them had simple lives. Cohen, a professor at Wesleyan University, fully delineates the conventional biographical matters of ancestry, parents, schooling, marriages, affairs, friendships, breakups, work, and death. Lovers of both sexes, the three mingled at varying depths with the Bloomsbury coterie, the Paris cohort, and the Hollywood crowd, but this well-researched, gossipy, informative, and entertaining biographical triptych is also a thoughtful, three-part inquiry into the meaning of failure, style, and sexual identity. Murphy, whose major claim to our attention is ephemeral—reading voraciously and never completing her biography of Madame de Maintenon—gets nearly half of the book. De Acosta gets the brief middle, a “fantasia on a theme” that focuses on her collection of personal mementos, while Garland shapes the way British fashion lovers think about couture. All are engaged in making and remaking themselves as the “emergence of women of [their] generation into public life [becomes] one of the major shifts of the twentieth century.” Cohen secures a definitive place for them in the socio-cultural history of the period. Agency: Sterling Lord, Sterling Lord Literistic. (July)
close
Details