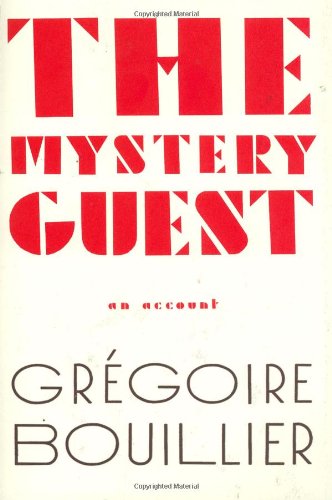 In this slim and lyrical memoir, French writer Bouillier tells of the moment when he received a phone call in his Paris apartment in the fall of 1990 ("It was the day Michel Leiris died"). Bouillier was 30 years old and asleep in all his clothes, and it had been years since the unnamed woman on the other end of the line had left him "without a word... the way they abandon dogs when summer comes." Rather than calling to reconnect or explain, she called to invite him to a party, several weeks hence, at the artist Sophie Calle's apartment, where he was to serve as the "Mystery Guest." What Bouillier (his untranslated won the Prix de Flore in 2002) makes of this simple setup is pure Gallic magic— a mix of hapless obsession, sophisticated abstraction, unearned righteousness and hyperarticulate self-doubt—as he tries to guess the woman's motivations and get a hold of his own feelings. The book's four short parts (beautifully rendered by Stein)—phone call, preparation, party and aftermath—are small miracles of Montaigne-like self-exploration. Reading as Bouillier moves through the light and dark of love, through its forms of "maniacal sublimation" and through its mystery, is arresting.