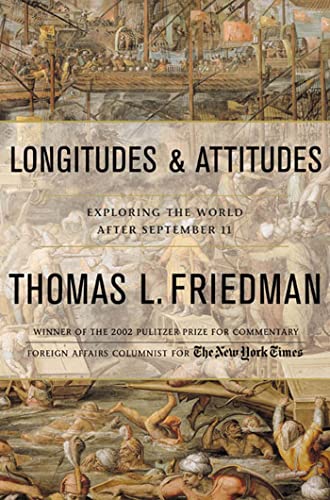 LONGITUDES AND ATTITUDES: Exploring the World After September 11

"History just took a right turn into a blind alley," comments the columnist in his latest book, "and something very dear has just been taken away from us." Tackling this observation from many different angles, this lucid book, consisting of Friedman's exceptionally frank and convincing columns and an insightful post-September 11 diary, prods at the questions surrounding that day and offers an invaluable reporter's perspective on the world from outside U.S. borders. The columns, which are the bulk of the book, represent a comprehensive album of the past two years—ranging from the usefulness of building a missile shield to analyzing the structure of Arab societies—yet they rarely stray from the central theme of promoting thoughtful and measured consideration of the U.S.' role in the world. However, the previously unpublished diary offers the most insight to the state of the world after September 11. Stranded in Israel during the attacks, Friedman ended up traveling throughout the Middle East, discovering how the terrorist attacks affected the region and uncovering many of the roots of anti-American sentiment, which he aptly describes alongside his reflections on watching his daughter's multicultural middle-school chorus sing "God Bless America." Unapologetically pro-American, Friedman's deliberation on what changed on September 11 outside of the U.S. ultimately centers on the strength of American society and our place in the world.