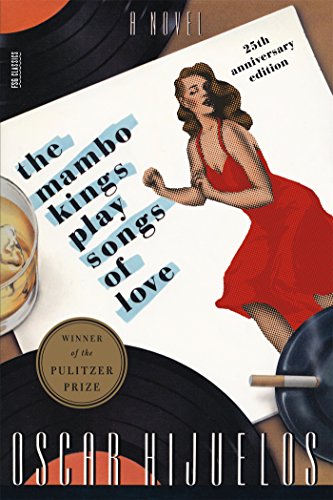 The Mambo Kings are two brothers, Cesar and Nestor Castillo, Cuban-born musicians who emigrate to New York City in 1949. They form a band and enjoy modest success, playing dance halls, nightclubs and quince parties in New York's Latin neighborhoods. Their popularity peaks in 1956 with a guest appearance on the I Love Lucy show, playing Ricky Ricardo's Cuban cousins and performing their only hit song in a bittersweet event that both frames the novel and serves as its emblematic heart. Hijuelos's first novel, Our House in the Last World , was justly praised for its tender vignettes of emigre Cuban life; here, he tells of the triumphs and tragedies that befall two men blessed with gigantic appetites and profoundly melancholic hearts--Cesar, the elder, and the bandleader, committed to the pursuit of life's pleasures, and Nestor, he of the ``dark, soulful countenance,'' forever plunging through a dark, Latin gloom. In a performance that deepens the canon of American ethnic literature, Hijuelos evokes, by day, a New York of crowded Harlem apartments made cheery by Cuban hospitality, and by night, a raucous club scene of stiletto heels and waxy pompadours--all set against a backdrop of a square, 1950s America that thinks worldliness means knowing the cha-cha. With an unerring ear for period idioms (``Hello you big lug'') and a comic generosity that renders even Cesar's sexual bravado forgivable if not quite believable, Hijuelos has depicted a world as enchanting (yet much closer to home) as that in Garcia Marquez's Love in the Time of Cholera . The lyricism of Hijuelos's language is wonderfully restrained, conveying with equal facility ribald comedy and heartfelt pathos. Despite a questionable choice of narrative conceit (Cesar recollects the novel from a seedy ``Hotel Splendour'' in 1980), Hijuelos's pure storytelling skills commission every incident with a life and breath of its own. (Aug.)
close
Details