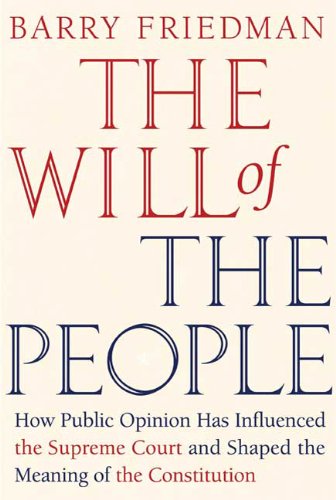 The Will of the People: How Public Opinion Has Influenced the Supreme Court and Shaped the Meaning of the Constitution

Rather than a cloistered priesthood interpreting a sacred text, the Supreme Court is a canny group of political operators, argues this fascinating revisionist constitutional history. NYU law prof Friedman lucidly chronicles the Court's fraught relationship with presidents, Congress and the states, who have defied, threatened and rejiggered the Court when its rulings offended them. The Court has nonetheless made itself felt, Friedman argues, by cultivating powerful constituencies and aligning with prevailing winds: it became the handmaiden of Progressive-era industrialists and now reliably (and for the good, Friedman thinks) locates the moderate consensus on vexed issues like abortion and gay rights. Friedman offers a fresh, dynamic rethinking of the role of the Constitution and the Court that puts democratic politics at the center of the story.