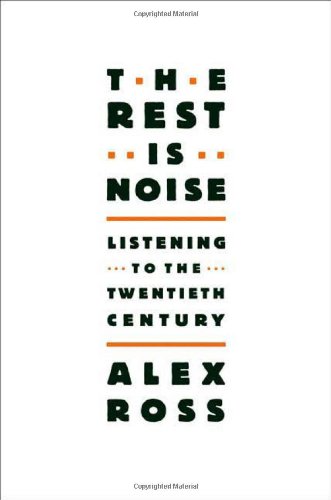 The Rest Is Noise: Listening to the Twentieth Century

Ross, the classical music critic for the , leads a whirlwind tour from the Viennese premiere of Richard Strauss's in 1906 to minimalist Steve Reich's downtown Manhattan apartment. The wide-ranging historical material is organized in thematic essays grounded in personalities and places, in a disarmingly comprehensive style reminiscent of historian Otto Friedrich. Thus, composers who led dramatic lives—such as Shostakovich's struggles under the Soviet regime—make for gripping reading, but Ross treats each composer with equal gravitas. The real strength of this study, however, lies in his detailed musical analysis, teasing out—in precise but readily accessible language—the notes that link Leonard Bernstein's to Arnold Schoenberg's avant-garde compositions or hint at a connection between Sibelius and John Coltrane. Among the many notable passages, a close reading of Benjamin Britten's opera stands out for its masterful blend of artistic and biographical insight. Readers new to classical music will quickly seek out the recordings Ross recommends, especially the works by less prominent composers, and even avid fans will find themselves hearing familiar favorites with new ears.