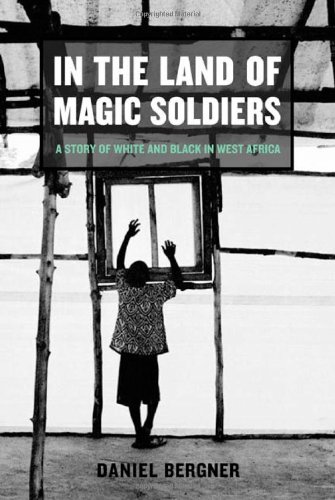 IN THE LAND OF MAGIC SOLDIERS: A Story of White and Black in West Africa

In this compilation of stories from the civil war–ravaged West African country of Sierra Leone, Bergner () demonstrates a deft dramatic touch. He all too vividly recreates the violent rebel advance on the capital, Freetown, as seen through the eyes of Lamin Jusu Jarka, whose hands were chopped off against the root of a mango tree. It is hard to believe, after reading about the "twenty seconds of localized apocalypse" that a South African mercenary helicopter pilot unleashed on rebel trucks, that Bergner was not himself hovering above the scene. The tragedy is precisely described, but Bergner struggles to discover the motivations of his subjects. Why the Kortenhovens, a white missionary family from Michigan, stay in Sierra Leone for two decades and why Michael Josiah, a government soldier and able student of Western medicine, still believes in healing of the local juju men, are questions that, after intense speculation, remain enigmas. Bergner's biggest struggle, though, is with himself. He often seems to be searching the war-torn country for evidence of his own personal responsibility. When talking to natives who wished for British recolonization, he "all but appealed for racial resentment or historical embitterment." With so many exotic and compelling stories in Sierra Leone to be told, the reader is left wondering why the author has spent so much time telling his own. Despite his thorough research and narrative flair, Bergner falls into the journalistic travelogue's trap—his commentary tells the reader more about the journalist than about the place visited.