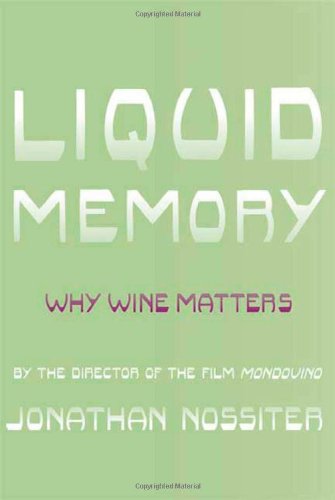 Nossiter made the wine world documentary , and his first impassioned, personal book is a discursion into the slippery relationships between wine, taste, power and memory. The author is particularly eager to take on the vinicultural powers that be. Drawing on lifelong personal and professional experience with these ideas, the author travels to Paris and Burgundy, from small wine shops to a multinational, franchised wine emporium, through restaurants of varying reputation and public regard, and finally onto a tour of Burgundian . The entire time, Nossiter debates constantly with various professionals about such matters as consumption-driven culture, contemporary wine criticism and the importance of place—also known as —not just in wine but in culture generally. There are amusing scenes with such notables as Michelin-starred chef Alain Senderens and deft comparisons, such as the equation of a critic like Robert Parker to another “decider,” Dubya himself. The quixotic approach, with such frequent tactics as film comparisons, meets with mixed success, at regular risk of losing the reader. It's a book equally intriguing and irritating, and one feels that the author wants it that way.