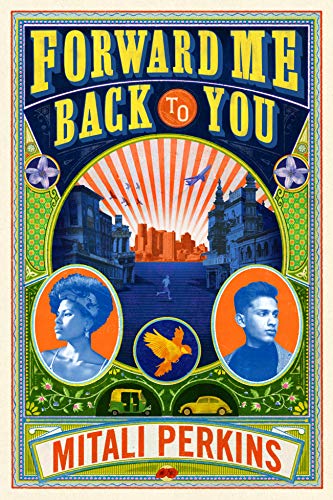 Forward Me Back to You

Perkins’s latest follows alternating protagonists: brown-skinned Kat, a superhero-obsessed, tough-as-nails regional jiujitsu champion and California girl with a single, white-skinned mother; and India-born superhero enthusiast Robin, adopted by wealthy white parents in Boston. After Kat fights off an attempted sexual assault by a popular athlete at school, her mother sends her east to stay with a family friend’s great-aunt, Grandma Vee. Kat is angry at the world (at her mom for sending her away, at the “wolf” who attacked her), but when Grandma Vee asks Kat to visit with her friend Robin at her Christian church’s youth group, she reluctantly complies. Soon, Kat gets pulled into a trip to fight human trafficking and serve victims in Kolkata—Robin’s birthplace. While in India, Robin takes on his birth name, Ravi, and the two face their demons, meet family, make friends, and find the best inside themselves called upon. In fast-moving prose that is layered with emotion—rage, grief, dismay, hope, vulnerability, love—Perkins’s novel pulses with heart and questions of identity as well as talk of faith, prayer, God, and social justice. Ages 14–up. [em](Apr.) [/em]
close
Details