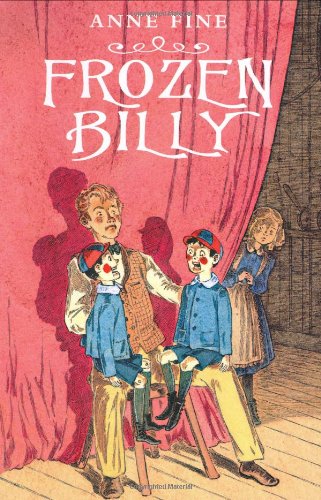 Fine's ( ) macabre Edwardian set piece assembles two down-trodden siblings, their talented ale-swilling ventriloquist uncle and his creepy dummy, Frozen Billy. Clarissa narrates the increasingly dire circumstances she and her brother, Will, face. While in Ireland for Grandmother's funeral, their mother is wrongly imprisoned. Their father, meanwhile, is in Australia forging a livelihood and an eventual home for the family. With Uncle Len nominally child-sitting (drinking and betting away his pay), the pair quits school to work. Clarrie assumes her mother's job at a fabric shop and Will, displaying a talent for mimicry and improvisation, joins Uncle Len's act in the Alhambra variety show. Toil and worry extract their toll. Will begins to disassociate as his childhood is reduced to playing the identically dressed fool to Frozen Billy. Resourceful Clarrie unfolds a complex plan to spirit away four family members on an Australia-bound ship with one ticket among them. Fine's sprightly language and intricate plotting briskly move the clan to the brink of the Australian landing. McBain's ink drawings mainly serve well, but an odd illustrated plot point—which evokes the mockery of old minstrel shows—may puzzle readers. Clarrie constructs a girl dummy in blackface with filched props and trims, darkening the puppet's face and limbs with stage make-up to resemble the smiling girl on a cocoa tin. When Clarrie (echoing Will's shtick with Billy) makes herself up equivalently, this interesting effort becomes a flawed one. Ages 8-12.