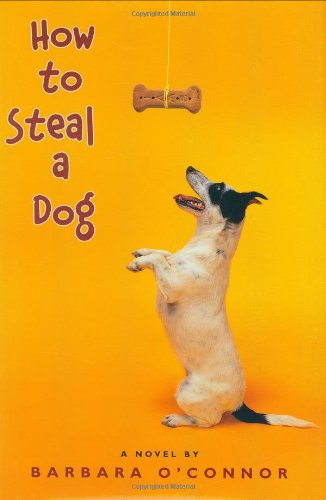 How to Steal a Dog

O'Connor ( ) blends her usual poignancy and insight in another tale set in a small North Carolina town. "The day I decided to steal a dog was the same day my best friend, Luanne Godfrey, found out I lived in a car," begins plucky Georgina. After her father "just waltzed off and left us with nothing but three rolls of quarters and a mayonnaise jar full of wadded-up dollar bills," Georgina, her mother and younger brother, Toby, were evicted from their apartment. The three now sleep in their old Chevy. Since her mother works two jobs, saving up for a place to live, Georgina takes care of Toby after school, while carefree Luanne attends ballet class and Girl Scouts with her new best friend. A poster announcing a $500 reward for a missing dog gives the heroine an idea for helping to secure lodging. She diligently writes in her notebook rules for stealing a dog, but they turn out to be more complicated than she anticipates. The devastated woman whose pet Georgina purloins (and who is not wealthy enough to furnish a reward) and a wise and caring homeless man Georgina meets also affect her plan. Speaking with at times heartbreaking honesty, this likable young narrator convincingly articulates her frustration, resentment and confusion as she comes to her decisions. O'Connor once again smoothly balances challenging themes with her heroine's strength and sense of humor. Ages 8-12.