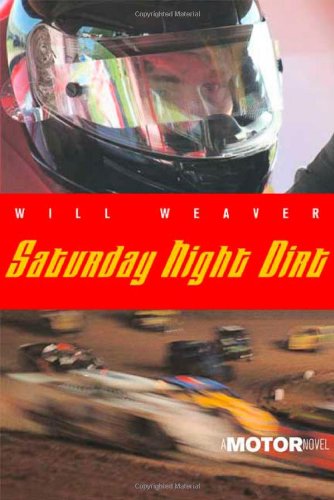 Weaver ( ; ) launches his Motor series with this fast-paced introduction to the rough-and-tumble world of car racing. Headwaters Speedway in northern Minnesota is a struggling track desperate for some big-name racers to draw in fans and revenue. One Saturday night, when rainstorms force cancellations at other tracks throughout the state, owner Johnny Walters, a former racer left paralyzed after a severe crash, and his 17-year-old daughter, Melody, get a bigger crowd than they ever imagined. Weaver entertains readers with a motley cast: Maurice Battier, the track's fastidious flagman; Beau Kim, 16, the tai chiâ€“loving Mod-Four racer; and Sonny Down Wind, who refuses all sponsorship offers. At times the language gets mired in hardcore automotive lingo: â€œHe was cranking over the engine to find top dead center, or TDC, valve position.â€ And with 10 characters introduced in the first 50 pages, it's initially difficult to keep them straight. But in limited space, Weaver fleshes each one out enough to leave a lasting impression on readers and make them curious to know what happens next. Ages 12-up.