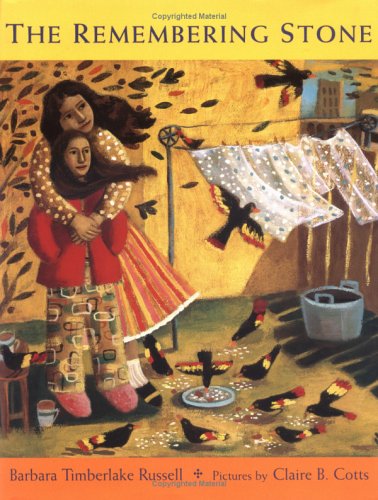 Russell's ( ) lyrical story centers on Ana and her mother, who imagine where the blackbirds in their garden are headed. Musing that they might fly across the ocean, Mamá tells them, "One day I will return like you" and the young narrator knows that she is dreaming of visiting her native Costa Rica. Ana then shifts focus, somewhat jarringly, to tell of others' dreams: her best friend wants to be an actress, the Asian man who serves the two girls lunch at a restaurant dreams of bringing his distant family "here" to live. Everyone shares dreams except the grouchy baker who employs Ana's mother, who in turn suggests that the baker has forgotten that "a person must have dreams as well as bread." Ana, wondering what her own dream might be, discovers the answer when she places a stone brought from Costa Rica under her pillow one night and "imagine[s] the land from which it came." Cotts's ( ) inventively stylized paintings balance subdued background colors with controlled, energetic use of bright patterns on figures and objects in the foreground. The effect stays true to both the story's often folk-like mood and to its contemporary urban setting, enhancing the text's movements between the everyday and the imagined. Ages 5-8.