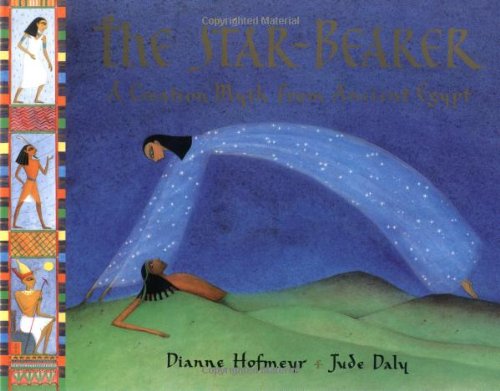 THE STAR-BEARER: A Creation Myth from Ancient Egypt

Dianne Hofmeyr, THE STAR-BEARER: A Creation Myth from Ancient Egypt

Hofmeyr and Daly, previously partnered for , again join forces to weave a colorful picture book from one of the world's oldest storytelling traditions. Key figures in Egyptian mythology spring to life in Hofmeyr's vivid narration: the bud of a lotus flower breaks through the surface of water, and, "as the petals slowly unfurled, they spread a blue luster in the darkness. Enclosed in the center of the bloom was the golden godchild Atum." Atum, the creator, brings forth Shu, the god of air, and Tefnut, the goddess of dew and rain, who are the tempestuous parents of stubborn and inseparable children Geb, the god of the earth, and Nut, the goddess of the sky. When Geb and Nut's carrying on halts Atum's creation of the rest of the world ("If you stay so close to each other, there will be no room for tall trees and rugged mountains, for rivers and waterfalls..."), Atum must assert his authority to divide the siblings into the earth and sky we recognize today. Daly's stylized, willowy figures shine against elegant backgrounds of rich, jewel-like blues and greens, bathed in sun-, moon- or starlight. The paintings go far in visually bridging slight gaps in Hofmeyr's narrative. Even with such gaps, the author's lustrous imagery and poetic tone give this ancient story a fresh feel with much appeal. Ages 4-up.