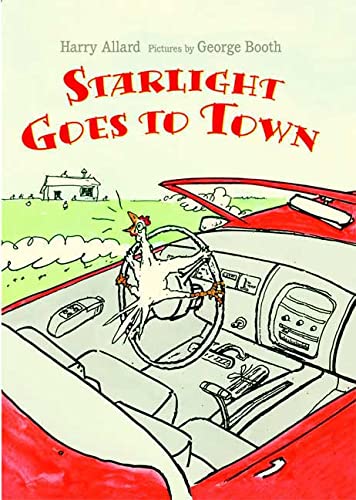 Despite an inspired pairing and divinely ridiculous moments, this venture is more shaggy dog tale than comic revelation. Starlight (aka Ethel Fae Klucksworth) is a scrawny, google-eyed Tennessee hen who, aided by a “professional chicken fairy godmother,” tries to be a supermodel in Milan. Her quest for glory against all odds starts off like a dream vehicle for some of Allard’s (the Miss Nelson books) and cartoonist Booth’s favorite themes: anthropomorphism run amok, the unstoppable power of plucky cluelessness and the arbitrary nature of the universe, among them. Booth’s adult fans will relish his deadpan wit: the other hens roost as Starlight sleeps in a properly made bed; unfiled papers rain down from tall stacks in a malfunctioning office, illuminated by the trademark naked light bulb. Allard once again appeals to his readers’ precocity with snarky dialogue, silly specificity and vocab gone mad (the other hens “gleek and fleer” at Starlight, while another is described as a “harebrained hobbledehoy”). But the ending, which abandons Starlight as she presides over an endless yard sale in rural Connecticut, is more skidding halt than rousing finish. Ages 5–up.