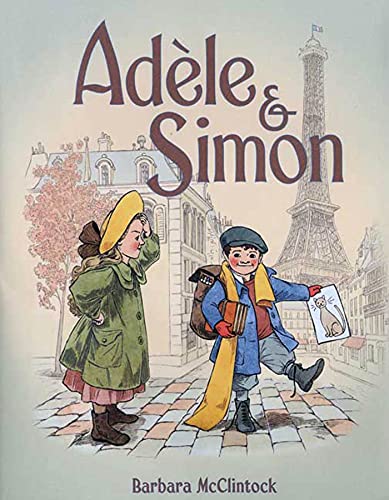 In this nostalgic charmer, McClintock ( ) imagines a walking tour of Paris circa 1900, traced by two distractible siblings on their way home from school. (The endpapers, taken from a 1907 Baedeker map, chart the roundabout route.) When Adèle greets Simon, "He [has] his hat and gloves and scarf and sweater, his coat and knapsack and books and crayons, and a drawing of a cat he'd made that morning." Despite his sister's pleading that he keep track of his possessions, Simon loses everything on the list. At a market, closely observed from a bird's eye–view, vendors sell carrots, books, birds and baskets, and Simon misplaces his drawing. Sharp-eyed readers might locate the boy's picture, but the siblings do not. Adèle and Simon move on to the Louvre, Notre-Dame and the Jardin du Luxembourg, where they watch the Punch and Judy show and a parade of the Republican Guard. Simon drops a belonging at every stop, but in the reassuring conclusion, a queue of watchful people arrives at the children's home to return the goods. In illustrations that mimic hand-colored engravings, McClintock pictures orange autumn foliage against pale blue-gray skies. She depicts every detail with precision and warmth, from architecture and cobblestones to horses, early automobiles and period clothing. An afterword with thumbnail images identifies each location and allusions to Daumier, Atget and a few Impressionists (other allusions, such as one to , are left to discover). McClintock scores a double coup, creating a must-see for francophiles and an engaging hide-and-seek game for homebodies. Ages 4-8. Agent: Jennie Dunham, Russell & Volkening.