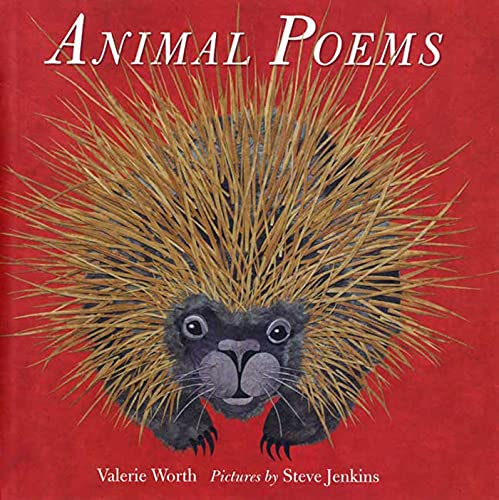 This pairing of the late Worth's exquisite poems with Jenkins's ( ) extraordinary, cut-paper illustrations make this a volume to treasure. Characteristic of the best of Worth's work, each poem in this handsome volume is a gem—full of crisp language, vivid images and thoughtful ideas. A keen observer, Worth captures not only the look of each animal she describes, but grounds her remarks with wise perceptions about the world both animals and humans inhabit. Camels "stand/ About munching and belching/ Like smug old maids/ Remembering their ancient/ Sway, when bearded/ Traders sailed them over/ The starry sand-waves." Jenkins's illustration portrays the subject as sloe-eyed and stately. His artwork, as textured as oil paintings, contains astonishing shadow and depth. Serrated paper edges resemble a squirrel's warming fur as "late autumn rains/ Fall colder than snow." The transparent tentacles of a jellyfish appear to undulate, "their hollow/ Veils and/ Trailed clappers/ Peal eternal/ Knells, for/ Valleys drowned/ And flooded hills." Jenkins features each animal silhouetted against a solid background (often cream or undersea blue), so that poem and illustration do not compete for attention but, rather, they work together to startle readers with their exactitude. Describing a spider's web, Worth comments, "The spider weaves it,/ .../ But at dawn, when/ It hangs spangled/ With silver water, frail/ .../ it is not/ Her web, but ours." This stunning collection will encourage readers to become careful observers, and to make the world of nature their own. Ages 4-up.