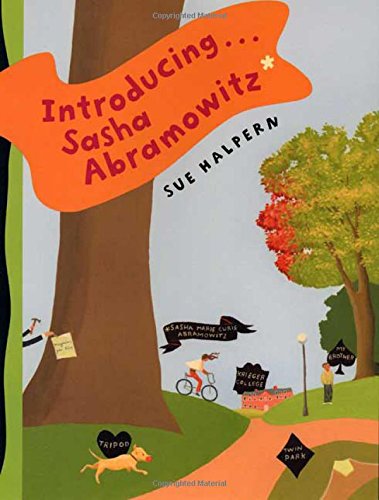 Halpern's ( ) first novel for children introduces narrator Sasha Marie Curie Abramowitz, a bright, outspoken 11-year-old who lives with her professor parents on the campus of a small college. Her older brother, Danny, suffers from Tourette's syndrome and attends a boarding school for students with special needs. A serendipitous twist brings Sasha together with Andrew, a likable college baseball star; their budding friendship forms the heart of this story. Halpern convincingly portrays Sasha's very real concerns, among them her changing friendship with her best friend who, in Sasha's opinion, spends far too much time with a boy in their class, and Sasha's embarrassment about her brother's condition. When Danny's school unexpectedly closes, readers get a firsthand glimpse of the complexities of life with Danny around, his moods, his tirades, all credibly described in Sasha's narrative (though, on an encouraging note, readers also learn of baseball player Jim Eisenreich, who made it to two World Series despite being plagued by the same affliction). One plot strand may stretch readers' credulity (Sasha, rather than the doctor, correctly diagnoses Andrew's complications when he's hospitalized for the same medical condition that afflicted Marie Curie, for whom Sasha is named and about whom she wrote a school report). Overall, this is a tale told by an engaging narrator, capped by an unexpected and affecting finale. Ages 10-up.