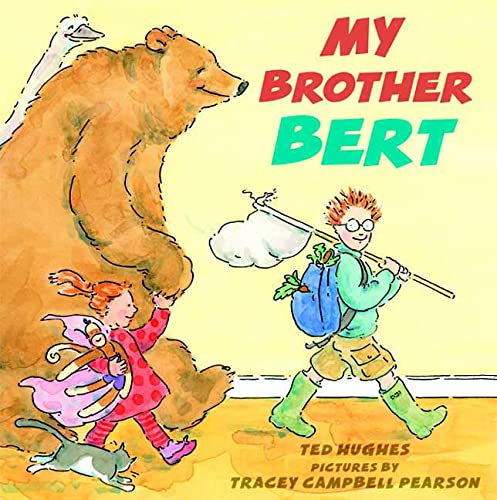 Pearson provides a suitably sunny setting for this light verse by the late acclaimed British poet, about a boy, Bert, who can't say no to any exotic pet. Among those hidden in his bedroom are a gorilla, a lion, pangolins (a kind of anteater) and “four Ostriches that deposit/ Their football eggs in his bedroom closet.” Taking inspiration from the unnamed narrator, Pearson imagines that Bert's little sister puts herself in charge of the menagerie (ignoring the “No Girls Allowed” sign on his door) while Bert is out making another acquisition. As the lines posit potential for comic catastrophe—“If you think [a Gorilla's] not such a scare,/ What if it quarrels with [Bert's] Grizzly Bear?”—the pictures show the girl instigating that exact disaster. Fans of Pearson's Awful Aardvark series already know the illustrator can be a poet herself when it comes to choreographing mischief: there's dancing, a sing-along, species cross-dressing and even a pool party in the bathroom—all of which are quelled just in time for the unsuspecting Bert's return. The good-natured mayhem will propel readers to the final page. Ages 3–6.