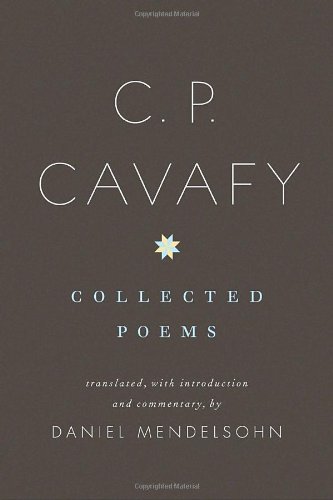 Already a celebrated critic, memoirist and classicist, Mendelsohn drew together his interests in ancient history, literature, gay life and culture, and beautiful language to produce the finest, most readable version of the modern Greek poet Cavafy (1863–1933) to come along in decades. Cavafy has long been highly regarded by American readers, especially for the straightforward, seemingly timeless, hard-to-pin-down tone of his poems—which alternately revel in and suffer from both ancient Greek history and homoerotic desire—but, as Mendelsohn observes in his deeply impassioned and informative introduction, many American readers overlook “those poems that are deliberately set in the obscurer margins, both geographical and temporal, of the Greek past... in favor of the works with more obvious contemporary appeal.” With this new, completely annotated, translation, Mendelsohn says he aims to “restore the balance,” to help readers reanimate Greek history with Cavafy, to see how relevant and pressing his whole oeuvre truly is. This larger volume (Knopf is also publishing Mendelsohn's version of Cavafy's , never before translated into English, as a separate volume, reviewed below) contains all the poems by Cavafy we have known in English, from famous works like “Ithaka” (“you will understand, by then, these Ithacas; what they mean”) and “The First Step” (“you must claim your right to be/ a citizen of the city of ideas”), all rendered with a lucid music. This is likely to be the definitive Cavafy for some time to come.