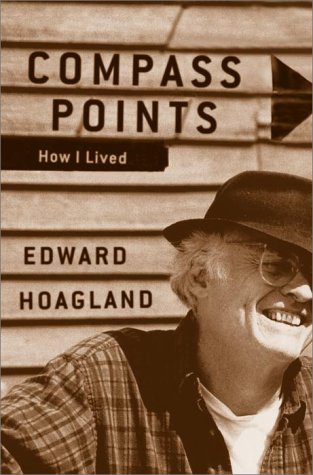 Compass Points: How I Lived

Noted novelist and essayist Hoagland (Cat Man; The Tugman's Passage; etc.) weighs in with a memoir in the form of 11 loosely interconnected autobiographical essays, the author's life unfolding thematically rather than temporally--an intriguing departure from the norm, but one that, when coupled with Hoagland's rambling, tangent-laden prose, yields mixed results. In his opening salvo, ""In the Country of the Blind,"" which explores his experience with a years-long descent into almost total blindness (from which he was eventually saved by surgery), frequent departures from the central subject create a compellingly rich and complex narrative that ably showcases Hoagland's mental agility and talent for finding significance in the small, often unnoticed encounters that make up everyday life. But ""Mentors and Roots,"" similarly digressive, is less successful: Ostensibly a meditation on the roles others have played in shaping the author's life, it never really coalesces into more than a catalogue of his relatives' and teachers' accomplishments. Nevertheless, readers who approach these essays in search of thought-provoking insights and opinions will not be disappointed. Consistently, at times almost disarmingly, candid, Hoagland grapples throughout with the issues that have most vexed him--failed or fraught relationships, adultery, the difficulty of forging a self-determined identity as a writer--and waxes lyrical about those that have brought him particular joy or satisfaction--parenthood, teaching, an adolescent stint in the circus. In all these cases, it's his struggle to find meaning and merit in certain crucial episodes in his life that makes for compelling reading. And Hoagland's often at his best when he strikes a quietly elegiac tone, as when he observes, ""Most of us live like stand-up comedians on a vaudeville stage... by our humble wits, messing up, swallowing an aspirin, knowing Hollywood won't call, thinking nobody we love will die today, just another day of sunshine and rain."" Lovers of fine prose will be delighted with this new volume. (Feb.) Forecast: Hoagland has a fine reputation among the literati, who will want to read particularly about his loss and regaining of sight. So this book should enjoy solid sales; a PW Interview is slated for February.
close
Details