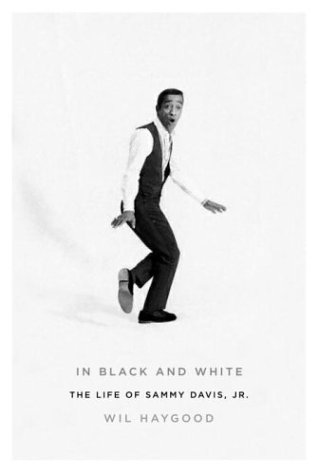 IN BLACK AND WHITE: The Life of Sammy Davis, Jr.

In this moving, exhaustive life of one of America's greatest entertainers, Haygood () casts Sammy Davis Jr. as a man shifting between identities, between the worlds of black people and white people. Born into vaudeville and raised by his grandmother and vaudevillian father, Davis (1925–1990) never knew the world off the stage, never experienced a loving mother and never experienced racism—until his stint in the army during WWII. Sammy spent most of his life before the army above the Mason-Dixon line in the protective bosom of the Will Mastin Trio (of which he and his father were two-thirds) and experienced his first love with a white woman in Montreal. From here, Haygood makes clear, Sammy wanted to be white—he had mostly white friends and courted ivory-skinned, blond women. As his career—and his determination to be accepted by white America—grew, so did problems with the media, including death threats from angry Southerners and Hollywood moguls not wanting the reputation of their white starlets (e.g., Kim Novak) to be tainted by Davis. Haygood shows how Davis desperately needed love and attention, so much so that he switched allegiances, first backing Kennedy and marching with Martin Luther King Jr. and Jesse Jackson, then, years later, being seen on national TV giving a hug to Archie Bunker (while doing a cameo) and Richard Nixon (while campaigning for him). Haygood's reporting and powerful prose reveal Davis's career against the backdrop of the swinging '60s and the Rat Pack (with Sinatra as a mighty presence in Davis's life) and Davis as a tragically complex man.