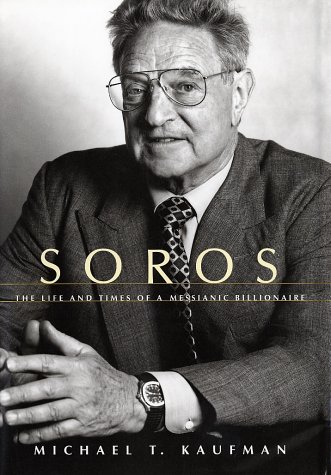 SOROS: The Life and Times of a Messianic Billionaire

At the age of 14, in Hungary, George Soros was pulled from his Jewish class at the gymnasium to work as a courier for the local Jewish Council, which had been set up by the invading Nazis to identify Jews. His first job was to deliver internment notices to local Jewish lawyers. The experience shaped Soros's sense of outrage at injustice and laid the foundation for his celebrated philanthropic efforts in later life. This thorough biography (written with his cooperation) of the world-famous investor is less hagiographic than comprehensive. By far the most exciting narrative sections are the earlier chapters detailing Soros's childhood in Nazi-occupied Hungary, his family seeking safety by passing as Christians, life under the Soviet occupation and Soros's escape when he fled to England to study at the London School of Economics. The book starts to explore more fully its subject's inner life when Soros moves to New York in 1956 and begins to make his billions on Wall Street—the importance of games, sports and competition in his life and career; his initial disenchantment with philanthropy ("foundations corrupt the impulse that led to their foundation"); and his desire to become a serious philosopher. At the age of 33, he wrote a critique of Freudian thought, which he sent to Karl Popper, and his book is devoted to his theory of "reflexivity." Kaufman, a journalist and author of , has researched his subject well and treats him with respect. While there is nothing shocking or surprising here, this biography offers a complete portrait of the private life of a complicated man who has made a huge mark on the world. Photos.