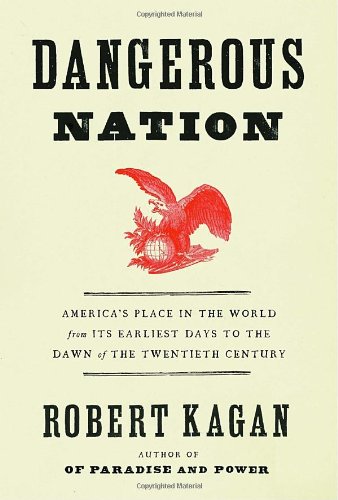 Dangerous Nation: America's Place in the World from Its Earliest Days to the Dawn of the 20th Century

One of America's great myths, says Kagan, is that the U.S. has always been isolationist, only rarely flexing its muscles beyond its borders. Not so: in the first half of a two-volume study of American foreign policy, columnist and bestselling author Kagan ( ) argues that even in the colonial era Americans restlessly pushed westward. At every turn, Kagan shows how a policy of aggressive expansion was inextricably linked with liberal democracy. Political leaders of the early republic developed expansionist policies in part because they worried that if they didn't respond to their clamoring constituents—farmers who wanted access to western land, for example—the people might rebel or secede. Also provocative is Kagan's reading of the Civil War as America's "first experiment in ideological conquest" and nation building in conquered territory. He then follows American expansion through the 19th century, as the U.S. increased its dominance in the western hemisphere and sought, in President Garfield's phrase, to become "the arbiter" of the Pacific. Kagan may overstate the extent to which contemporary Americans imagine U.S. history to be thoroughly isolationist; it's a straw man that this powerfully persuasive, sophisticated book hardly needs.