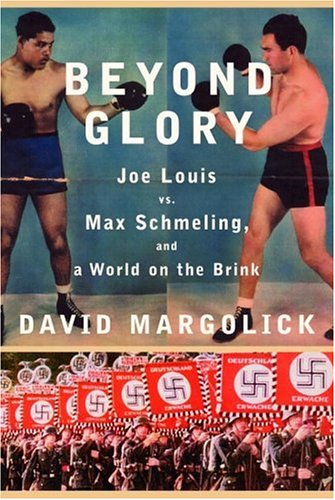 Beyond Glory: Joe Louis vs. Max Schmeling and a World on the Brink

Fought with thunderclouds of war on the horizon, the 1938 heavyweight rematch between Detroit's Joe Louis and Germany's Max Schmeling qualifies as the sort of sporting event that coalesces into a symbolic moment with much larger themes. The African-American Louis's success and demeanor were an unsubtle rebuke to the Aryan theories of race; the affable Schmeling, for his part, would be shoehorned into the role of "Nazi Max," despite the uneasiness of the fit—later that year, on Kristallnacht, he would courageously protect two German Jews. contributor Margolick ( ) keeps his bold, colorful focus squarely on the hubbub leading up to the bout; the all-consuming welter of hype—almost every utterance in the book is tinged by race or geopolitics—makes for compelling reading. The fight pitted talent against tactics: Schmeling's previous defeat of the hitherto "unbeatable" Louis depended on Schmeling's shrewd perception of a flaw in Louis's technique. Louis was a critical transitional figure between the controversial first African-American champ, Jack Johnson, and the equally polarizing Muhammad Ali. Schmeling, in turn, was truly the antithesis of the thugs who were running his country. Every chapter in the company of such estimable and likable stalwarts is an unalloyed pleasure. Photos. .