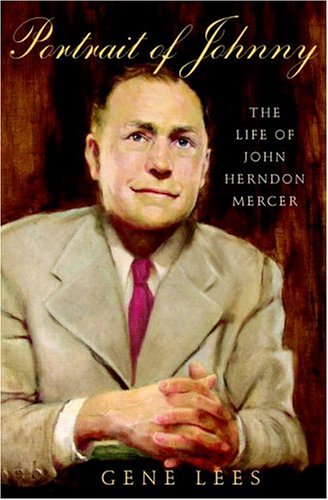 PORTRAIT OF JOHNNY: The Life of John Herndon Mercer

Johnny Mercer wrote some of the best-known lyrics in the American repertoire ("Moon River"; "Black Magic"; "Accentuate the Positive"; etc.); he won four Academy Awards for his songs and helped found Capitol Records. Lees, a biographer ( , etc.) and publisher of the award-winning , met Mercer in the twilight of his career and maintained a friendship with him until Mercer's death in 1976. Lee's biography differs from Philip Furia's more scholarly and novelistic chiefly in its conversational tone and in Lees's confident, insightful analysis of the music, but it also must bear the weight of the author's feelings about Mercer's family and career. The decline of Mercer's fame roughly coincides with, as Lees puts it, the death of "the golden age of American songwriting" and the "rising tide of the meretricious" (read: rock and roll), and the book periodically gets bogged down in Lees's curmudgeonly grumblings about the superiority of the big band era. Lees also seems unnecessarily judgmental in his accounts of Mercer's marriage to Ginger Meehan, whom he blames in part for her husband's depression, angry tirades and alcoholism. Lees's personal accounts are more illustrative than informative, confirming an already well-documented picture of Mercer's generosity and intelligence as well as his alcoholic vitriol.