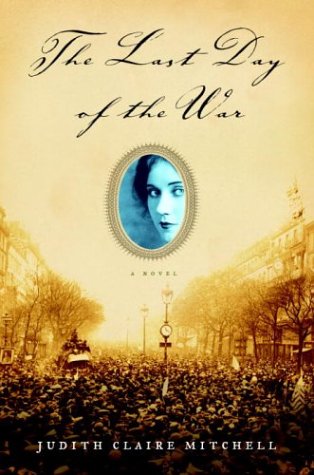 THE LAST DAY OF THE WAR

All the heroes are liars in this smart, entertaining novel set at the close of World War I. Yael Weiss, an 18-year-old Jewish girl from St. Louis, falls in love at first sight with Dub Hagopian, an Armenian-American soldier. After a brief encounter at the public library, Yael changes her name, pretends she is Christian, assumes a phony age and joins up with the YMCA to follow him abroad without knowing who or where he is. In Europe, Yael meets fellow Y girl and troublemaker Brennan (" It's their call to arms, this demure question"), who helps her spot Dub by chance at a Paris train station. Meanwhile, Dub has been serving as a translator for the hypocritical powers involved in the peace process, but he also secretly works for Erinyes, an underground organization fighting to avenge the Armenian genocide of 1915. With pluck and determination, Yael helps him track exiled Turkish war criminals, taking on the Armenian cause as her own. Like her heroine, Mitchell's debut is willfully charming, alternately impudent and intense (" . From the French . meaning egg. As in egg handgrenaten"). Resisting the temptation to write an "issue" book, Mitchell manages to capture a horrendous chapter in world history through exhaustive research while allowing a full spectrum of humor and pathos to flesh out the picture.