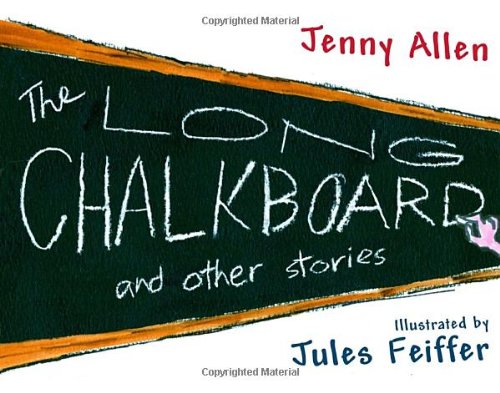 The Long Chalkboard and Other Stories

These three stories will interest socially savvy young adult readers—young book-worms rather than hipsters—and liberal-leaning adults who enjoy a wry laugh. The first story, which concerns a long chalk-board that gives almost magical creativity to those who use it, feels like a modern fairy tale. Instead of becoming queen, a woman becomes a great filmmaker. Instead of becoming a king, a boy gets into a prestigious university. The second, which concerns two competing children's authors who find they're better off in love, is a story New Yorkers will appreciate, with a strong vibe of Upper West Side anxiety. The third deals with a woman with a nearly magical ability to cook chili. Though Allen is listed as author, it's very much Feiffer's book: the pieces lack his bite, but they have his old charm and whimsy in spades. The art has a ballet-like quality; poise has replaced the attitude Feiffer had back when his name was synonymous with the . The final story has a whiff of his old stance—the fabulous chili maker is called on to make chili for a political cause, and it comes out awful. The chili cook becomes a cause célèbre, and T-shirts announce "chili shouldn't have an agenda."