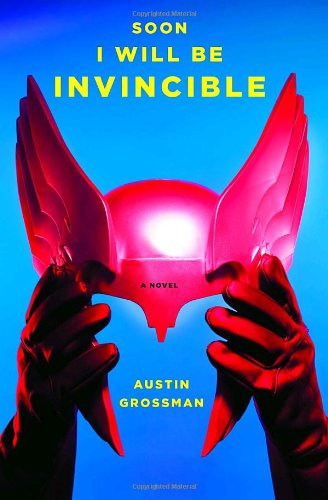 Soon I Will Be Invincible

The realm of comic book heroes and villains gets a dose of realism in this whimsical debut from game design consultant Grossman. The story shifts between the perspectives of Doctor Impossible, a brilliant scientist turned world's greatest menace, and Fatale, a lonely cyborg and the newest addition to the venerable group of heroes known as the Champions. Though he's been out of commission for a while, Doctor Impossible hatches a scheme to knock the planet out of orbit ("As the Earth grows colder, my power becomes apparent, and the nations submit," he reasons). Meanwhile, Champions leader Corefire goes missing, and Fatale has to learn the ropes of superherodom as the conventional climactic showdown (at Doctor Impossible's secret lair) draws near. However fantastical, the characters (including a "genetic metahuman" and "an elite fairy guard") are thoughtfully portrayed, with Fatale—stuck in a perpetual existential crisis—bemused over the Champions' purpose, and Doctor Impossible wondering "whether the smartest man in the world has done the smartest thing he could with his life." Grossman dabbles in a host of themes—power, greed, fame, the pitfalls of ego—in this engrossing page-turner, broadening the appeal of an already inviting scenario.