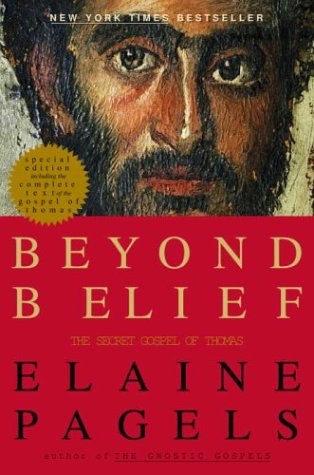 BEYOND BELIEF: The Secret Gospel of Thomas

In this majestic new book, Pagels () ranges panoramically over the history of early Christianity, demonstrating the religion's initial tremendous diversity and its narrowing to include only certain texts supporting certain beliefs. At the center of her book is the conflict between the gospels of John and Thomas. Reading these gospels closely, she shows that Thomas offered readers a message of spiritual enlightenment. Rather than promoting Jesus as the only light of the world, Thomas taught individuals that "there is a light within each person, and it lights up the whole universe. If it does not shine, there is darkness." As she eloquently and provocatively argues, the author of John wrote his gospel as a refutation of Thomas, portraying the disciple Thomas as a fool when he doubts Jesus, and Jesus as the only true light of the world. Pagels goes on to demonstrate that the early Christian writer Irenaeus promoted John as the true gospel while he excluded Thomas, and a host of other early gospels, from the list of those texts that he considered authoritative. His list became the basis for the New Testament canon when it was fixed in 357. Pagels suggests that we recover Thomas as a way of embracing the glorious diversity of religious tradition. As she elegantly contends, religion is not merely an assent to a set of beliefs, but a rich, multifaceted fabric of teachings and experiences that connect us with the divine. Exhilarating reading, Pagels's book offers a model of careful and thoughtful scholarship in the lively and exciting prose of a good mystery writer.