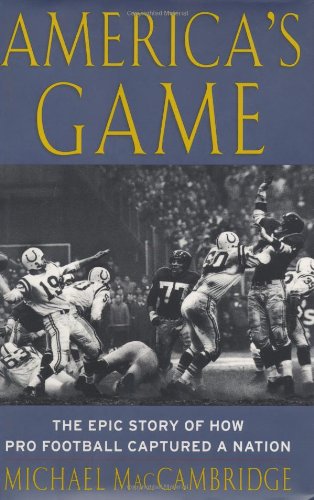 AMERICA'S GAME: The Epic Story of How Pro Football Captured a Nation

MacCambridge's sweeping history of pro football starts just before WWII, when the National Football League was still largely a regional organization, and ends with Janet Jackson's wardrobe malfunction at Super Bowl XXXVIII. Though there are plenty of vivid descriptions of remarkable games, what sets this chronicle apart from a slew of other recent football books is the depth and breadth of its stories about players, coaches and owners. The centerpiece of this personal approach is the extensive portrait of the career of Pete Rozelle, who became the NFL's commissioner at 33 and initiated many of the measures that ensured the sport's cultural ascendancy, including a television deal that distributed revenue equally among all teams. MacCambridge ( Sports Illustrated ) zeroes in on two sideline projects that might have made the greatest difference in football's rise over baseball: NFL Properties, which brought a consistent standard of excellence to fan paraphernalia; and NFL Films, which solidified the myth of the game as an epic struggle through the instantly recognizable narration of John Facenda. MacCambridge also considers the sport's track record regarding race relations, noting that the NFL's first black players were on the field months before Jackie Robinson, while highlighting the roles played by great African-American athletes like Paul Younger and Jim Brown. Though some fans may be disappointed that their favorite teams and players aren't extensively covered, this magisterial history is a fitting acknowledgment of the sport's legacy.